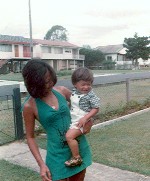 I was truly blessed with the most undemanding baby any mum could possibly hope
for. Right from the start baby Derrick slept well and within a month, he was
sleeping right through the night. Only one problem though, because he was such
a guzzler, he was prone to the occasional projectile vomiting! A minor problem
really, as he was otherwise a healthy and happy little chappie. Rick was a good
daddy when he was home on leave and would help bathe little Derrick and even
change his nappy whenever necessary.

All went well until we received news that Rick was to be transferred back to
living in Australia, due to the company’s cutback program. Unsure if our Muslim
wedding would be recognized in Australia, we decided to go through another
marriage at the Australian High Commission in Napier Road. With Brother and
Rahimah as our witnesses and with baby Derrick in my arms, we arrived for the
simple marriage ceremony – a quiet uneventful occasion marked only by Derrick
making his presence known with an impressive display of projectile vomiting
right in the middle of the ceremony!

After our meagre worldly possessions were packed and shipped off, we bade an
emotional farewell to Brother and Rahimah at the old Paya Lebar International
Airport. We left Singapore as planned but due to an engine problem, the plane
turned around and we landed back in Singapore with free accommodation at the
Hilton Hotel. Weren’t Brother and Rahimah surprised to receive our call! They
came into town to spend a few precious hours with us the next morning and we
again departed from Singapore that late afternoon, enjoying an uneventful
flight back to Brisbane. We stayed temporarily at Sunnybank, with with Wanda,
John and their baby daughter, Tania, who was born about three months before
Derrick. Before we drove them nuts with our presence, we managed to find rented
accommodation in the suburb of Rocklea, just in time for the delivery of our
shipment of household contents from Singapore. It was then back to work in
Ujung Pandang, Sulawesi, (formerly known as Makasar, Celebes, Indonesia) for
Rick, and for me, the beginning of a new lifestyle.

No longer do I have the pleasure of roaming around in familiar territory, no
more regular visits from Brother and Rahimah to look forward to, no Rojak or
Satay man doing their weekly rounds, nothing at all for me except loneliness.
It was only natural that I initially wallowed in self-pity during Rick’s
absence, especially in the evening and at night after baby Derrick’s day was
done. I spent many lonely nights either reading or watching television. I
didn’t write too many letters to Brother and Rahimah in case they could read
between the lines and would then worry about me. Having baby Derrick proved to
be a blessing in every sense of the word – he gave me a reason to wake up each
morning and face another day. It wasn’t too long before I stopped reminiscing
about Singapore and found the incentive to make the best of my new situation.

My daily routine consisted of waking up in the morning, tending to my baby’s
morning needs and waiting till his morning naps before doing the household
chores. We did not have the luxury of a washing machine or tumble-dryer so I
had to hand-wash everything from soiled nappies to dirty clothing and hang them
on the clothesline in the huge backyard. After Derrick’s morning nap, I would
feed him, change him, put him in his stroller and leisurely walk to the shops
for my daily grocery needs. When it came to buying meat from the butcher, I
flatly refused to buy any hogget. Despite being told otherwise by Rick and
Wanda, in my mind back then, a hog is a pig so a hogget must therefore be a
piglet! Yes, I am suspicious by nature and only began buying hogget (cheaper
than lamb) after I had consulted my trusted dictionary which explained that a
hogget is a sheep under the age of one year, yet to be sheared. Where was I? Oh
yes, my daily routine… some days, I would venture to the city by train and
spend the whole day window-shopping just to keep from getting bored.

Wanda proved to be an excellent sister-in-law – she would quite often phone me
and we would meet up at her place with me catching the train to get to her
home. Back then, I was still rather green when it came to “Aussie Talk”, so I
must have sounded like the village idiot sometimes. As an example, our very
first telephone conversation that stuck to my mind to this very day was as
follows:
Wanda: Hello Mona! Whatcha-doin’-this-arvo?
Me: Oh hello Wanda, I beg your pardon?
Wanda: Whatcha-doin’-this-arvo?
Me: Could you repeat that slowly?
Wanda: What are you doing this arvo?
Me: Sorry? In English, please?
Wanda: Which part dincha get?
Me: Most of it, actually!
Wanda: OK, let’s start again – What are you doing
this afternoon?
Me: Why didn’t you say that in the first place!?
Not doing anything exciting, why?…
(All along I thought she was speaking Dutch! Mind you, that wasn’t the last of
it but I’ll talk about that a little further on.)

“If the mountain will not come to Mohammed, Mohammed will go to the mountain.”
– in my case, the mountain exemplified people who hadn’t approach me extending
hands of friendship… In my backyard there happened to grow a mulberry tree,
laden with ripening berries. By summer, Derrick had grown into a toddler and
would follow me around like a faithful puppy dog when I hang my washing on the
line. Sometimes he would help by handing me the clothes pegs, other times, he
would get side-tracked and toddle off to the mulberry tree to sample a few
fallen berries. Did I have fun getting the mulberry stains off his clothes and
various parts of his exposed body! ‘What has mulberries got to do with
friends?’, I hear you ask. Well, contrary to what my friends may think, I am
basically a shy person – I lack the guts to just go up to strangers and
casually introducing myself. I mean, what if they were anti-Asians? How
embarrassing would it be if I was rebuffed? So anyway, I thought of a plan – I
would pick some ripe mulberries and go knock on the neighbours’ doors to offer
them some. If they politely refuse and slam the door in my face, then I’d know
for sure, wouldn’t I? So off I set, making friends, one neighbour at a time.

Emily and Tibby were the first neighbours I approached with my mulberry
offering, they were a D.I.N.K. (Double Income, No Kids) middle-aged couple and
lived in one of the units to my left. This friendly gesture won me a friendship
that lasted to this day with the now widowed Emily. Somewhat bolstered by their
warm response, I next approached a single mum and her two teenaged girls and we
got along great as we shared the same taste in music. Unfortunately, they moved
away soon after. Across the road lived a Danish family and soon after we became
friends, Lise and I became shopping buddies with her showing me where to get
the best bargains. When Rick was home, we would often go over in the evenings
for a few drinks with Lise and Gert who regaled us with their hilarious
accounts of life and their grasping of Aussie English when they first arrived
as migrants several years prior. I remained in contact with them until the
sudden death of Gert several years later and Lise went back to live in Denmark
with their two children.

Whenever Rick was home on leave, we socialized with Wanda and John and their
few close friends, playing weekly squash (I was pretty agile back then), having
barbecues in summer, going to the beach near the Gold Coast and generally
having fun together. Naturally, I did a lot of cooking for everyone and
fortunately, they loved Chinese cuisine. One fine day, it was my turn to cook
the family dinner and while shopping for ingredients at a fresh seafood shop, a
snapper head caught my eye. Suddenly, I developed a craving for a feed of Fish
Head Curry so without a second thought, I purchased it, brought it back to
Wanda’s place and cooked myself a single serve of this delicious dish. For the
rest of the family, I had cooked Fried Rice with Chicken and Sweet and Sour
Prawns. Impatiently, I waited for tea-time and when it was finally time to eat,
I eagerly began attacking my Fish Head Curry with gusto, forgoing the prawn
dish altogether. Minutes into the meal, Wanda turned to John and gave him an
almighty kick on his shin under the table and exclaimed, “Jonathan! Stop
staring at Mona! My Godfather! Don’t you know it’s rude to stare?” John turned
beetroot red and immediately apologized, of course. It turned out that he had
never seen anyone eat a fish head before and had sat motionless in his chair
watching my every move while his own food was getting cold! Even though John
has always been quite adventurous in the eating department, he declined the
offer to sample my Fish Head Curry that night…

Naturally, after several months of living in Brisbane, I figured I had a pretty
fair understanding of Aussie English until this incident with Mum Joyce. She
was visiting Wanda for a few days and I happened to be there when somewhat
agitatedly she asked, “Have you seen my port?” ‘Oh dear,’ I thought to myself,
‘Didn’t know that Mum’s an alcoholic!’ as I looked carefully at the contents of
John’s bar. What a relief to discover that she was actually looking for her
suitcase! Another amusing episode occurred when Wanda asked me if I would like
to come for a run to the shops. I politely declined with the excuse that I
didn’t feel too energetic for anything that strenuous. With a puzzled look, she
headed downstairs while I quickly dashed out to the balcony, curious to see her
run wearing sandals. I was rather disappointed when I saw her got into her car
and zoomed off!

About a year of scrimping and saving saw us purchasing our very own home in the
suburb of Oxley. Nothing flash, mind you, it was a small 3-bedroom weatherboard
home on a big block of land. I thought it was absolutely marvellous and
immediately envisioned having my very own mini vegetable farm, fruit trees, the
works… However, that plan never did materialise. One fine morning, not long
after we had settled in our new home, I woke up feeling nauseous. True to my
intuition, it was soon confirmed that I was with child. Further good news soon
followed, we were to move back to Singapore where the family would be based
while Rick would work in Saudi Arabia. I began packing that very day! Our home
was put on the rental list and our few worldly possessions were packed and
stored in Wanda’s basement. I excitedly began counting the days to our
departure back to good old Singapore!