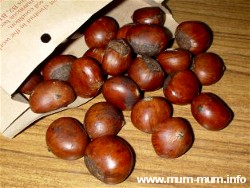 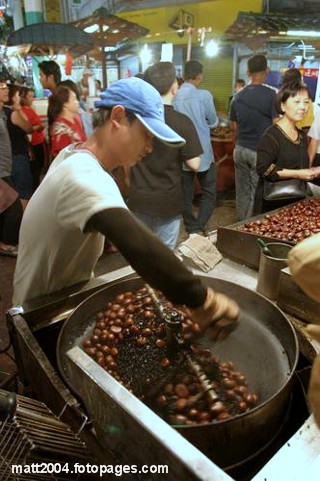 We were at the Rubble and Riches weekend flea market at Laverton one fine wintery Sunday, just walking around being totally amazed at what some people had for sale there… Just sauntering along sticky-beaking, when what should greet my eyes and nostrils but the sight and aroma of roasting chestnuts.

Of course they brought back memories of night markets/bazaars in Singapore where hawkers tempted the milling throng of night shoppers with freshly roasted chestnuts on site. Thus I was filled with an incredible desire to get me some so I joined the long queue and patiently waited to be served. $2 for a polystyrene cupful, the wee cup that you get when you order coffee ‘to go’. Not counting a couple of rancid ones that I unfortunately got, the chestnuts were delicious.

“Fancy paying $2 for a handful of roasted chestnuts!” I indignantly commented to my MOTH. That’s when a flash of brilliance hit me! If I roast my own chestnuts, I could really pig out. Mmmm… So after the market, off we went to the supermarket to pick some plump looking chestnuts (they were cheap, too!)

When we got home, I did the following:

Cranked up the oven, got it nice and hot.

Placed the chestnuts on a baking tray.

Placed the tray full of chestnuts in hot oven.

There! What could be simpler?

Now how long should I roast them for? Hmmm… not to worry, just check on them at regular intervals.

Some 20 – 25 minutes later, strange popping noises could be heard coming from the kitchen.

Aha! I thought gleefully, wouldn’t be long now…. better turn the oven off I guess.

Might be a good idea to take them out of the oven, methinks.

Opened oven door, got the tray out (using oven mitts, of course).

Hey! What’s happening here? The blooming chestnuts were continuing to pop all over the place!

Yes, they were cooked alright – and the kernels had exploded right out of their shells — onto the ceiling, back of stove, onto the kitchen benchtop, under chairs… heck, there were even bits on top of the fridge that I found some time later whilst joyfully doing some house cleaning!

Oh no! As they exploded, each would go flying across the kitchen, hit a hard surface (window, ceiling, walls…) and ricochetted all over the place.

The end result? No lovely roasted chestnuts for me, just a LOT of cleaning up to do.

Well, it eventually dawned on me that I should have looked on the Internet for chestnut roasting instructions in the first place! This was what I found:

HOW TO ROAST CHESTNUTS:

3. Serve in paper bags so you can eat them without dropping them. Peel away the skin and the pithy white bits inside to get to the sweet kernels.

Wouldn’t you know it? You’ve gotta cut a cross through the shell of each chestnut on one side before roasting!

I had thought all along that the crosses happened naturally as the chestnuts were roasting! Sheeeesh!!!! Still have a lot to learn, haven’t I?

No wonder they charge $2 for a cupful!

[About a year later, during kitchen renovations, unidentified foreign matter were discovered behind my kitchen cabinets. Laboratory tests proved these to be pieces of very old chestnut kernels!]