Both my M.O.T.H. (Man Of The House) and I love fishing but I used to get rather squeamish when it came to using wriggly, slimy, agitated worms as bait! This is an account of my first fishing experience, using live earthworms as bait.

The day before the planned trip, armed with a small gardening spade and an old bucket, the two of us went “worm-hunting”. What a team we made – with my eagle eye, I designated myself to be the worm ‘spotter’, shifting a few rocks and potted plants to expose the earthworms reposing underneath. My MOTH was the ‘picker-upper’ as there was no way in the world anyone could get me to handle a slimey, wriggly Helodrilus caliginosus! Once we had a sufficient number (more than enough for our couple of days – fishing – enough for a week-long venture actually), we stored them in some earth and a few bits of dampened shredded newspaper in an empty plastic ice-cream tub, complete with breathing holes punched in the lid and left the tub on the back porch.

Clothes for all kinds of weather were randomly crammed into a couple of overnight bags, contents of pantry transferred into numerous cartons, fold-up fishing chairs, fishing rods and tackle boxes were dragged out from their resting places in the spare room and all these packed into our 4WD vehicle in readiness for an early morning start. Partial contents of the fridge were then transferred into the car fridge which was duly kept running on our rumpus room floor overnight. Check list was then checked and double-checked to make sure everything was in order. We went to bed nice and early (like around midnight), and had the alarm set for 5am.

Somehow we woke up before the alarm clock could do its job ‘ it was then a matter of doing our normal morning routine except much earlier and at twice the normal speed. Then it was off to the kitchen to make a wake-up mug of coffee each. While the water was coming to the boil, I grabbed my most important ‘fishing companion’ (I had invested in a box of disposable plastic gloves) – and put that into my handbag! We then hauled the car-fridge to the vehicle to be re-plugged into the dc socket, threw the remaining contents of fridge into an esky (cool box), hastily gulped down the rest of the coffee, set the house alarm on, pulled the back door shut behind us, hopped into our vehicle and off we went’ Not five minutes into the drive, we had to turn around and come back for’ yes, the bait!!!

It was mid-morning by the time we reached the fishing spot by the Goulburn not too far from Lake Eildon. (We had come across this secluded fishing spot during one of our Sunday drives a few weeks before.) Once there, we grabbed all the necessary fishing tackle, esky containing our drinks, lunch and ‘munchies’ (snacks), fishing chairs and of course, the bait tub, out of the vehicle and set them all out in our very own fishing spot. My MOTH did the gentlemanly thing and baited up my hook for me first’ after that, it was a matter of every man for himself – he put a handful of worms into his own little container, grabbed his fishing tackle and disappeared into the bushes’ to either fish or take a nap.

Meanwhile, I carefully studied my surrounds for height of overhanging tree branches, distance between the trees, hidden logs in the river, distance to the opposite bank (it’s not a very wide river) and so on. Once confident of my casting safety zone, I then adopted a rather professional fishing stance and cast’ smack bang into a tree branch right overhead!!! Well, maybe if I tug on my line quite gently the baited hook would dislodge itself from that tiresome twig’ No? Well, a bit harder should do the trick’ No? Oh well, still a bit harder then’ Ah ha! That did the trick! But alas, while up there, the worm had somehow managed to wriggle its way off the hook and escape! All was not lost, despite the fact that my MOTH was nowhere to be seen ‘ lucky for me to have remembered my disposable gloves, eh? So I diligently put my fishing rod down, got a pair of gloves from the box and slipped them on. It was then a matter of just putting a worm on my hook, right? Yeah, right! Five minutes into this operation and I was still stooped over my bare hook, trying to coax a worm to commit suicide on my hook! Finally, having lost all patience and coaxing ability, I mustered up enough courage to actually grab a worm and personally stab it with my hook. There! I finally did it! Now I could get back to trying to hook up a trout or two’

Well, to cut a long story short, at the end of that day, I ended up with at least a dozen pairs of ripped gloves, a whole bunch of twigs and leaves all around me, several hooks (some with worms, some without) and sinkers randomly scattered among tree branches, submerged logs and rocks, at least a couple in the bushes on the opposite bank of the river and NO FISH!!! Needless to say, I wasn’t exactly smiling each time my MOTH made his brief random appearances, especially when he wore a grin while showing off a nice trout he’d caught!!!

Just before sunset, we re-packed our fishing gear into our vehicle and headed for our pre-booked accommodation at the Lakeside Motel in Jamieson. The following day, we returned to our fishing spot and I spent the day netting yabbies (freshwater crayfish) instead! 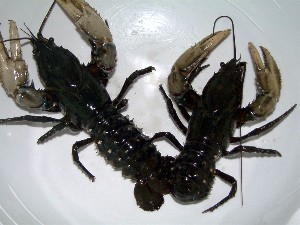 I have come a long way since then as I have managed to overcome my phobia of worms and no longer need those plastic disposable gloves when we go fishing. Nowadays, I actually have a worm farm so we don’t have to do any more worm ‘hunting’ either.