Our final year exam papers were sent to and graded at Cambridge University,
Great Britain and results were to be published in the Straits Times newspapers
early the following year. After my exams were over, I began to plan for my
future – in between reading day old newspapers that Brother brought home from
work for job possibilities, I tried my hand at dressmaking. If you had to wear
the masterpieces that Mother used to sometimes sew for me, you would understand
how thankful I was that she was too wrapped up in her gambling to do the same
again. She was adamant that dresses should be at least 2 sizes larger so that I
would “grow into them”… As an example, by the time my primary school uniform
started to fit nicely, I was six months in my secondary school! It was the same
way with school shoes – to prevent them from slipping off, a piece of rag was
shoved into the toe of each shoe – I sure must have presented a pretty picture
– this skinny, tall, bespectacled kid with FAB-scented tightly plaited hair in
ankle-length uniform with hockey sticks for legs that ended up in monstrous
white canvas shoes! To keep my shoes nice and white, I would get the blackboard
duster at school and whack my shoes with it. But I digress…

Where was I? Oh yes, home tailoring… By the time my schooling was over, I had
mastered the art of using Mother’s hand-operated Singer ™ sewing machine.
Based on the few lessons in Domestic Science classes that I had at school,
where we learnt to sew a pillowcase and a basic half-apron, among other simple
stuff, I set about sewing simple items of clothing – A-line skirts and
sleeveless tops. Of course there were no patterns involved and everything was
done by “eye judgement”… Being flat-chested and skinny as a rake meant that I
didn’t have to worry about sewing darts at the bust-line or pleats/darts around
the hips! Also, I didn’t know how to attach zippers using a sewing machine so I
would laboriously stitch them by hand, re-using zippers that had been un-picked
from the hand-me-downs I had. Mother sometimes brought home the occasional
piece of remnant fabric from her elder sister and when desperate, I rummaged
through the hand-me-downs from my rich cousins and cut out useable sections
wherever I could. I started re-cycling long before it became desirable!

To relieve the boredom and loneliness of being by myself almost everyday, I
also became more adventurous in the kitchen and even though recipe books were
unavailable to me, I began creating different ways of cooking cheap foodstuffs
instead of the “same old, same old” method. Soon, word of my cooking success
began to spread and relatives started insisting that I do the cooking when they
visited us at Chinese New Year or Hari Raya. Mother, far from taking offence,
increased the challenge for me by getting me to make fancy biscuits/cookies to
further impress them! I honestly don’t know how I managed to turn out all those
“kuih” (cakes, biscuits, etc.) with only a little portable oven that
was placed over the gas burner and an erratic little thermostat that had to be
constantly watched. I even managed to bake a “Western” cake or two that way. I
suppose Mother was proud of me and my achievements even though she never voiced
any appreciation as she did not want me to be “besar kepala” (swell-headed).

How fortunate for me that Mother was never keen on arranged marriages and
disregarded subtle hints that I would make a great wife for the eligible
English-educated son of “So-and-So”… For fear of any witchcraft spell being
used on me, she merely brushed these suggestions off by saying that I would
make a lousy wife because I am such a spitfire! But before I could say, “Good
on ya, Mum!”, she would elaborate further by giving grossly exaggerated
examples of my fiery temper! Whatever works, I suppose and after several of
these “accounts”, the comments changed to, “Oh, if only she had not been
English-educated, she would not have such a temper! What a damn shame.
Otherwise, she would make a perfect wife to *insert name here*’s son!” To which
Mother would reply with, “It’s not the English education at all – she was born
in the year of the Tiger you know, and to make it worse, she is a Scorpio! VERY
sharp sting, that girl!. Not at all like me – I was born in the year of the
*insert a good Chinese year here*”. Mother did not have a birth certificate so
never really knew how old she actually was. She discovered a unique way of
telling her age by getting me to read out the various characteristics of all
the zodiacal sun signs and Chinese animal years and would pick one that she
thought most suited her, thus giving herself a corresponding age in Chinese
years and Western zodiacal month! This of course varied from time to time,
depending on her mood.

As soon as the exam results were published and I found my name among the list
of successful students, Brother told me to enrol in a Pitman Shorthand and
typing course. Knowing how keen I was to join the workforce and to further
enhance my chances at getting a good job, my dear Brother had secretly been
saving up by walking to and from work to save 50 cents a day for the past year
for this very purpose. It was a part-time course consisting of one-hour lessons
three times a week. In between attending classes, I started applying for
various positions. First, I applied for and got a job as a tourist guide with a
travel agent but Mother did not approve, considering it to be an unsuitable
post, afraid that I might end up as a social escort or a high class call-girl!
I next saw a vacancy for a cadet journalist with the Straits Times and decided
to try my luck there. I sent in a hand-written letter of application and when I
turned up for the appointed interview, I obviously impressed the panel of
interviewers and was told that the job was mine! Wearing a big old grin on my
face, I floated home on cloud nine to share my good fortune with Mother.
Imagine my disappointment and frustration when Mother again put her foot down
and declared most firmly that no way would she have her daughter working odd
hours, having strange vehicles picking her up and dropping her off at all hours
of the day and besides, whatever would the neighbours think??? Brother and I
tried to reason with her but to no avail. If I insisted on taking the job, she
would disown me and THAT WAS THAT!

If I had been made of sterner stuff, I could have totally rebelled of course
but back in those days, a child, especially a teenaged girl, would not dream of
moving out of home and starting a new life for herself. There was no Government
assistance or any support group for the young and homeless. My option would be
to live as a boarder with one of my schoolmates’ family – an option I did not
even consider as my loyalty towards Mother was unquestionable. Besides, I could
not bear the thought of letting her down and proving that her relatives were
right when they said Western education for me was a bad move on her part! I
mean, how could you repay a woman who had adopted you and cared for you to the
best of her ability by running away from home? Of course I chose to regretfully
turn the job down and even though I resented Mother for quite some time
afterwards, I resigned myself to accept the fact that it just wasn’t meant to
be. I gradually got over my disappointment and continued half-heartedly with my
secretarial course. 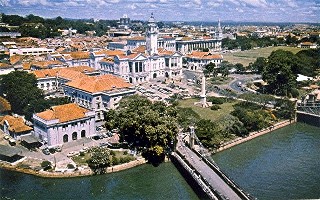 As I was walking along Empress
Place (to save 15cts bus fare to get to my class in Bras Basah Road), a young
American man stopped me to ask for directions and I offered to show him the
way. We chatted along the way and by the end of the short journey, we agreed to
become pen-pals. Frank A. C. was a 23-year-old from DeRidder, Louisiana, on a
tour of duty as a Flight Sergeant with the USAF based in DaNang, Vietnam. He
was in Singapore for his R & R. We got to know each other better through
regular letters. He was captivated by my Asian charm and magnetic personality
*ahem* and very soon began to talk of marriage. I was naturally very flattered
and overwhelmed by his love and almost tempted to accept his proposal but
common sense prevailed and I decided I was not ready to make such a serious
commitment. I tried to let him down as gently as I could but his letters
continued to pour in at my girl-friend’s address for me. I finally stopped
responding altogether. My girlfriend tried to pick up where I left off but he
gave her letter to a mate of his. He was a sincere, sweet man who respected my
strict upbringing and did not take advantage of me. I am sure he would have
been a good husband. Occasionally I wonder if he is still alive and if he
sometimes thinks of his “Mona Lisa”…